Check out pictures of this year's Revolutionary War Reenactment and Encampment 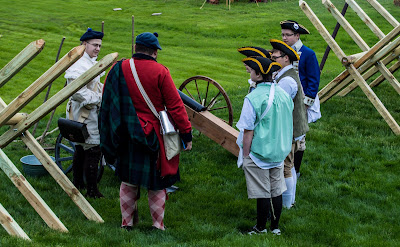 May 24, 2019
Constance Gibbs
It’s a whole new world in Disney’s remake of the 1992 animated film Aladdin. Most of the story remains the same. A lowly “street rat” meets a genie, falls in love with a princess, and tries to save a kingdom from the evil Jafar. But the new movie is live-action, not animated. And it features dynamic new dance scenes.

JAMAL SIMS is the film’s choreographer. A choreographer designs the physical movements in a dance. For Aladdin, Sims and his team were inspired to combine different dance styles. “It was fun to incorporate traditional styles of Arabic dancing with hip-hop,” he told TIME for Kids.

One performance features dancers at a parade. Sims says it was challenging to put together. “We had eight horses, six camels, and other real live animals in this procession with the dancers,” he says. “Everything moving down the street had to move in perfect sync.”

Sims says he strongly relates to the movie’s theme of being who you are: “Having the courage to show up as yourself and know that you’re good enough is a big thing for me.”
Posted by Mr. von Kamp at 8:03 AM No comments:

The GeoBee is designed to encourage students to learn about the world. Students from grades 4 through 8 can compete for a chance to win college scholarships.

This isn’t Nihar’s first time as a bee champion. In 2016, he shared the top prize with Jairam Hathwar at the Scripps National Spelling Bee. And he was a finalist in last year’s GeoBee.

This week, the National Geographic Society also held finals for its first-ever GeoChallenge. The nationwide team competition challenges students to develop innovations for urgent problems. This year’s theme was plastic pollution in our waterways. The winning team was from Flushing Christian School, in New York City. The team built a model of a device that would use filters to remove plastic debris from a river. The prize was $25,000. The team members will receive guidance from National Geographic employees as they further develop the project.

Got the geography bug? Registration for the 2020 GeoBee and GeoChallenge opens in August.
Posted by Mr. von Kamp at 8:04 AM No comments:


Posted by Araceli Obando at 7:40 AM No comments:

Back to the Moon


By Karena Phan
NASA is on a mission to put the first woman and the next man on the moon by 2024. On May 16, the space agency took the latest step in that process. It announced the 11 companies selected to help produce advanced human lunar landers. These spacecraft are used to transport astronauts to the moon’s surface during a moon mission.

NASA has named this mission Artemis. In Greek mythology, Artemis is the twin sister of Apollo and goddess of the moon.

NASA last sent people to the moon on the Apollo 17 mission. That was in 1972. Now, the agency wants to learn if humans can live there. “President Donald Trump has asked NASA to accelerate our plans to return to the moon,” NASA Administrator Jim Bridenstine notes on the organization’s website. “This time, when we go to the moon, we will stay.”

The 11 companies NASA has partnered with will study human landing systems and develop models. “Our team is excited to get back to the moon quickly as possible,” said Marshall Smith. He is director for human lunar exploration programs at NASA. Partnering with the companies is “an important step” to achieving that goal, he adds.

The companies have been chosen from eight states. The better-known companies include SpaceX, in California, and Boeing, in Texas. Others include Blue Origin, in Washington; Dynetics, in Alabama; and Lockheed Martin, in Colorado.

NASA has awarded the companies a total of $45.5 million. Each company must also contribute to the total cost of the project. This will reduce costs to U.S. taxpayers. It will also encourage other companies to invest in NASA’s lunar projects.
Posted by Mr. von Kamp at 11:23 AM No comments:


Posted by Araceli Obando at 8:00 AM No comments: